I had my MRI done of my back Thurs.  It was uneventful.  I didn't sleep well the night before so I think I actually fell asleep in the tube.  If you know how loud it is inside that tube, even with earplugs, that was an accomplishment to fall asleep in there.  I wont know the results until an appointment Thursday.  I am confident there is nothing exciting to report on the findings.

I took my brace off Saturday morning and tested out walking with zero assistance of any kind.  It was pretty good!  I walked around the block a few times to test  it out.  I did put it back on for the rest of the day as I was going to be on uneven ground later in the day.

Sunday, I never put it on.  I mildly stumble on occasion but who doesn't?

Lori was saying that when she is behind me walking, she can tell my left calf muscle is much smaller. I measured my calfs and my right leg is 2 inches larger.  Wowser!  Hopefully with me not using my brace nearly as much, my left leg will get back in the game.

Knock on wood, I have not had a really bad day in a long time.  Thank goodness for that.  I am so grateful!

The NW is supposed to have a crazy heat wave coming so my step count might suffer as we are hiding inside, trying not to melt.

Have a great week.

It has been a great week.  Knock on wood, the pain seems to finally be manageable.  It has taken 3 months but we are getting there.

I think I key thing for me is that I must be moving.  A lot.  Not doing anything is not good for me.

I have been walking most every day and most nights after the kids go to bed.  I have been wanting to go on a hike at Siouxon Falls in the Gifford Pinchot National Forest.  I had gone there a few years ago with the kids and we didn't make it very far before they wanted to turn around and  head back.  It has been on my radar to hike ever since. 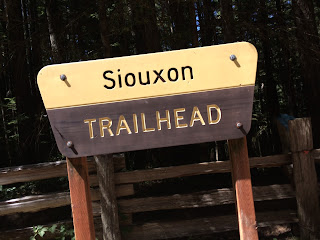 The full trail is some crazy 12 mile hike or something like that.  I did NOT have that as my goal.  I did want to get a couple of miles in though.

Unfortunately, I got a late start from home.  Pesky work stuff.  It is approx. 1.25 hour drive from home.  The last 30 minutes is pretty brutal from road conditions.  I would not take a family sedan up there.  Other people did though.

It was a nice drive and the weather was perfect.  When I got to the trailhead, the parking lot was pretty full.

I new I would be tight on time so I headed right out.  I had my new trekking poles from Costco with me.  I can not say enough about those things.  Probably the best $30 I have spent since surgery.  They were so natural to walk with.  When on flat or relatively flat ground, you just move your arms like normal.  When I got to steep sections, I used them like ski poles and used them to "push" me up like a skier would.  I was instantly in love with them.

I didn't even take any music with me.  I did take my ham radio with me but I could not hit a repeater from where I was at so it was silent the entire time.

My only regret on the hike is that I got the late start and could not go as far as I wanted to.  I did end up just shy of 1.5 miles each way making it an almost 3 mile round trip.  My plan was to take nice hike on the way out, taking pictures and taking in the sites.  At a set time, I would turn around and high tail it back to my truck.  As I was walking along, I did completely lose track of time.  When I did look at my watch, it was my time to turn around.  I was pretty bummed as I could have gone much much further.  That's OK, I will just have to go back.  And, get a much earlier start to the day. 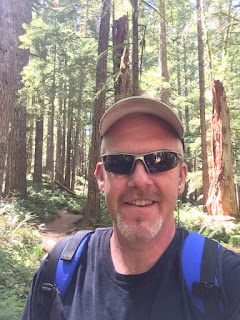 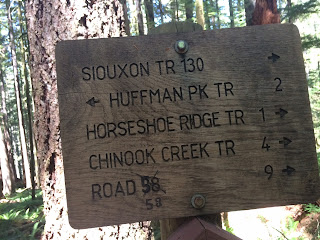 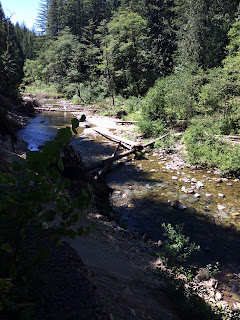 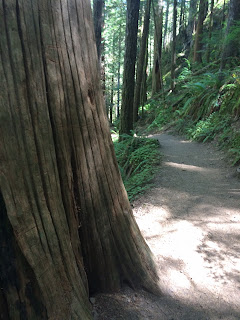 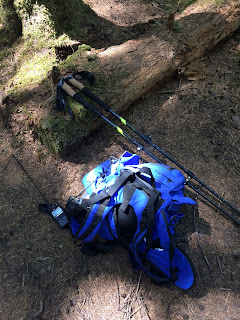 Today I have my 3 month MRI.  I wont have the result until next Thurs when I see an oncologist.  I am pretty certain, it will come back with good results and this is just a formality.

Have a great weekend.  Get out and do something you love.

3 months, 1 day post op.  Time is flying.  So many things have changed.  Some improvements, some unexpected challenges.

My latest challenges are in the bathroom department.  Ever since the trip to the ER, it has been a challenge.  I am pretty sure some things were stretched out during that incident as I am still sore but getting better.  I have changed my diet and trying to get more fruits and veggies.  It is a very frustrating and embarrassing thing to go through not too mention, very uncomfortable.  Having numbness in that area does not help at all.

After the "easy" hike we took last weekend, I got some trekking poles.  My physical therapist had recommended them to me in the past.  I did some reading and found that people felt the same way I did about them.  They are for old people.  That is until you try them.  People rave about them.  I got a pair at Costco.  I have them all set up and ready to go.  We just need to test them out now.  In my reading, many authors said they have many other uses other than walking.  You can use them to move things out of the way like poison ivy.  Smart!  Also they can be used to defend yourself against wildlife.  I don't plan on defending myself against any wildlife thank you very much!  I will give a report after I try them out.

I have been on a lull for any bike rides lately.  I have been doing OK on my walking though.

"The Beatings will continue until moral improves."

I first saw that saying many many years ago and it had a very negative meaning to me.  I have just adopted that saying though.

When I was released from the hospital, I was told to keep moving.  No matter what.  Exercise.   Move.  Be active.  Normally that is not a problem for me.

Last week I got into a bad "funk" for whatever reason.  I was totally not myself.  I let my exercise slip to the lowest it had been in a long time.  And, I felt like crap!  I started pulling myself back out of my funk Friday.  I was forcing myself to take walks.  Even short ones around the block.  It was my turning point to get out of the funk.

Saturday was our local "Cruisn' the Couve", a car show/cruise/bitchen cars everywhere event in Vancouver.  We had great friends over for ice cream and then we walked the cruise.  We walked and walked and walked.  It hurt but it was well worth it.  I doubled my normal step count goal.  I felt it in the morning but it was a good pain.

Sunday, Lori found an "easy" hike for us to go on towards Astoria (the Oregon coast).  Lets just say this "easy" hike was grossly mis categorized as easy.  I am not being a wimp here, it was a semi bad ass hike.  The saving grace is that it was only .6 miles.  But it was .6 miles of rocks, roots, damn steep at points, up and down hiking.  I guess in my eyes, if I think "easy", I think of a hike that a parent could take a stroller on.  Am I wrong here?
I have  bad problem of giving up or not stopping when maybe I should.  Maybe that is a good thing though.  I made the hike into the waterfall.  The pain of the hike was worth the reward of the waterfall.  It was truly awesome once we got there.  The hike out was pretty painful with a lot of stops and breathers and cussing but I made it back out.  After the hike, we stopped at the best pie shop in the NW but that is another story.

All of that to say, it was exactly what I needed.  I need to move.  And move a lot.  It sucks doing it but I feel so much better after that.  Which brings me back to, "The Beatings will continue until moral improves."  The beatings happened and my moral is kicking ass again.

Have a great week.

I had a tough day yesterday. I ended up in the ER due to constipation. It felt like my intestines were tearing. What a nightmare this is. 3 hours later and a bottle of "juice" to fix me, I was on my way.

Between the pain, the fun ER visit, the realization that I can no longer do some things or not do them as well, is taking a mental toll on me.

My goal is to be as active as I possibly can. Luckily between the kids and Lori, we are normally very active. I just need to keep that up.
Posted by Mike at 3:41 PM No comments:

Not a whole lot to update on.
We had an excellent 4th of July weekend.  We went to the lake for a few days.  We celebrated the 4th and Loris Grandmas birthday.  It was different not having her Gran or Gramps there.  We stayed in their place.  We all had a lot of fun.  It was a huge workout just being there, walking around, getting in and out of the boat, lighting off fireworks...
I was definitely sore after we got home but for the most part, it was a good sore.
I am having different pains in different locations but not horrible.
This was the first week that I did not have acupuncture.  I was pretty nervous about missing a week but it went well.
I think this week marks probably the first week that I have not had a single Dr appointment at all.  What a relief that is.
I have not been scheduled for my next MRI that is supposed to be this month some time.  I am in no rush anyway.
Have a great weekend.
Posted by Mike at 8:38 AM No comments: